As I sit on this blisteringly cold January day my mind drifts to our lovely friend, the tulip.

You see my mother loves tulips.  Even though we lived in Riverwoods and had to contend with deer feasting on them she would plant them.  Not en masse but in charming little bundles that would cheerfully pop up in spring.  She would sometimes even pair them with Allium, in order to deter our beautiful yet hungry friends.

Her love affair continues today, although now she must battle chipmunks and squirrels who enjoy digging them up and moving them around.  This year I finally convinced her to even try my favorite tulip blend created by a most trusted vendor.  It’s called French Blend.  Wow, wait until she sees her spring display! 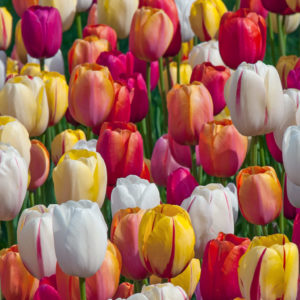 It’s difficult to think of spring on such a snow covered day, but it will come.  My contemplating of the tulip has led me to some poking around.  I’ve found some interesting tidbits that I thought I’d share…

And that my friends, is just some of the fun facts around out delightful spring friend.