My guess is that many people don’t find dirt very interesting.  But the truth is that people study it intensely.  We actually employ someone who is a soils expert, Mike Curry!

So what exactly Is pulverized topsoil?  Topsoil is the upper layer of the Earth’s crust,  usually the top 2 to 8 inches. It has the highest concentration of microrganisms and organic matter and is where most of the soil’s biological activity occurs. Plants generally sink their roots into and obtain most of their nutrients from this rich layer.

This high concentration of organic matter is actually what turns soil black.  So the darker it is, the more nutrients in the soil, the better your plants and turf will do.  Ever notice “grey” colored dirt.  It often occurs in areas where a lot of salt is applied during snow removal services.  That’s  because those microorganisms have been killed and the organic matter is leached out.

This is why it is so important to install mulch and compost in planting beds.  It helps provide a protective layer and breaks down over time, reintroducing those beneficial nutrients back into that top layer of soil.

It’s also equally as important that you topdress your lawn with some kind of compost when core aerating and overseeding for the same reason.

Most people probably don’t know how topsoil is created.  It’s a fairly simple process.  Most often topsoil is taken from construction sites where there are large open spaces that need to be excavated anyway.  That soil is then “pulverized” through a machine to remove any debris as well as giving it a more consistent texture that makes it easier to spread and fine grade. 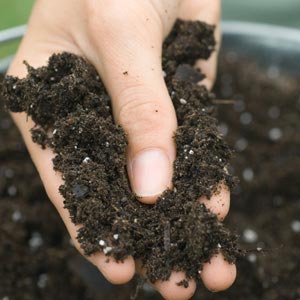