It is not often a client of many years’ states that it is time to start over.  A needed house addition forced a rethink of a visually stunning mature landscape. However, a silver lining was present. Although the client loved his yard, water issues had plagued it for many years putting stress on the existing plantings. This was the opportunity that was needed to solve the water issue while providing new elements to the yard. Change, in this case, was good.

Irregular bluestone on the old patio was saved for reuse on the new pool deck. It was considered that aged bluestone and new bluestone coping might not visually mesh. To make this work we meticulously detailed the pool coping giving one side a bullnose finish and the other an irregular edge. This permitted a seamless transition between the pool deck and pool coping.  A 5’ tall privacy wall was added along the property line, which paralleled the pool. For the wall, the house brick was matched as closely as possible, which also included mimicking the weeping mortar joints. Plantings and a water feature were added and accented by small details in the new walls.

A new large formal lawn panel was added which served three roles. First, it became a place to drain and collect the water through the addition of an underground gravel collection system. Second, it helped counterbalance the heavily planted gardens along its perimeter. Lastly, the lawn could become a usable space for a large tent during parties.

Bordering the lawn is an irregular bluestone walkway which is adjacent to raised garden beds. These raised beds help further keep the plantings dry and allow for a spectacular garden to flourish. The perimeter walkway not only allows for strolls through the garden, but also provides a pathway to other elements around the yard.

An elevated sitting patio, opposite the house, was a way to meet the demand by the client for a sitting area to read the morning paper while sitting in the solitude of the garden. A small meandering brook and pond where added to help drown out any exterior noise. This was accented by a bluestone slab bridge which allows a way to get over the brook to a woodland garden walk.

A formal dining and cocktail patio finishes off the opposite side of the lawn panel.  This patio is flanked by an herb garden and a formal planting of hybrid tea roses. These roses are prized plantings of the client and had to be transplanted, cared for off-site in greenhouses, and then replanted so that they would all survive. Similar to all the new gardens, specialty amended soils were used to help insure the roses would thrive.

Mature trees were either present or brought in, at a very full size, to finish the overall look of the garden. These created a gorgeous back drop and also afforded the opportunity to create a woodland garden walk. The perimeter of the property was finished with a custom wood fence that helps keep out deer and other critters that might disrupt the garden. In the end a once lush garden became a better version of itself. A new pool and spa were added and surrounded with repurposed Irregular bluestone for the pool deck. The far ends of the pool were expanded to allow informal sitting and dinning spaces. 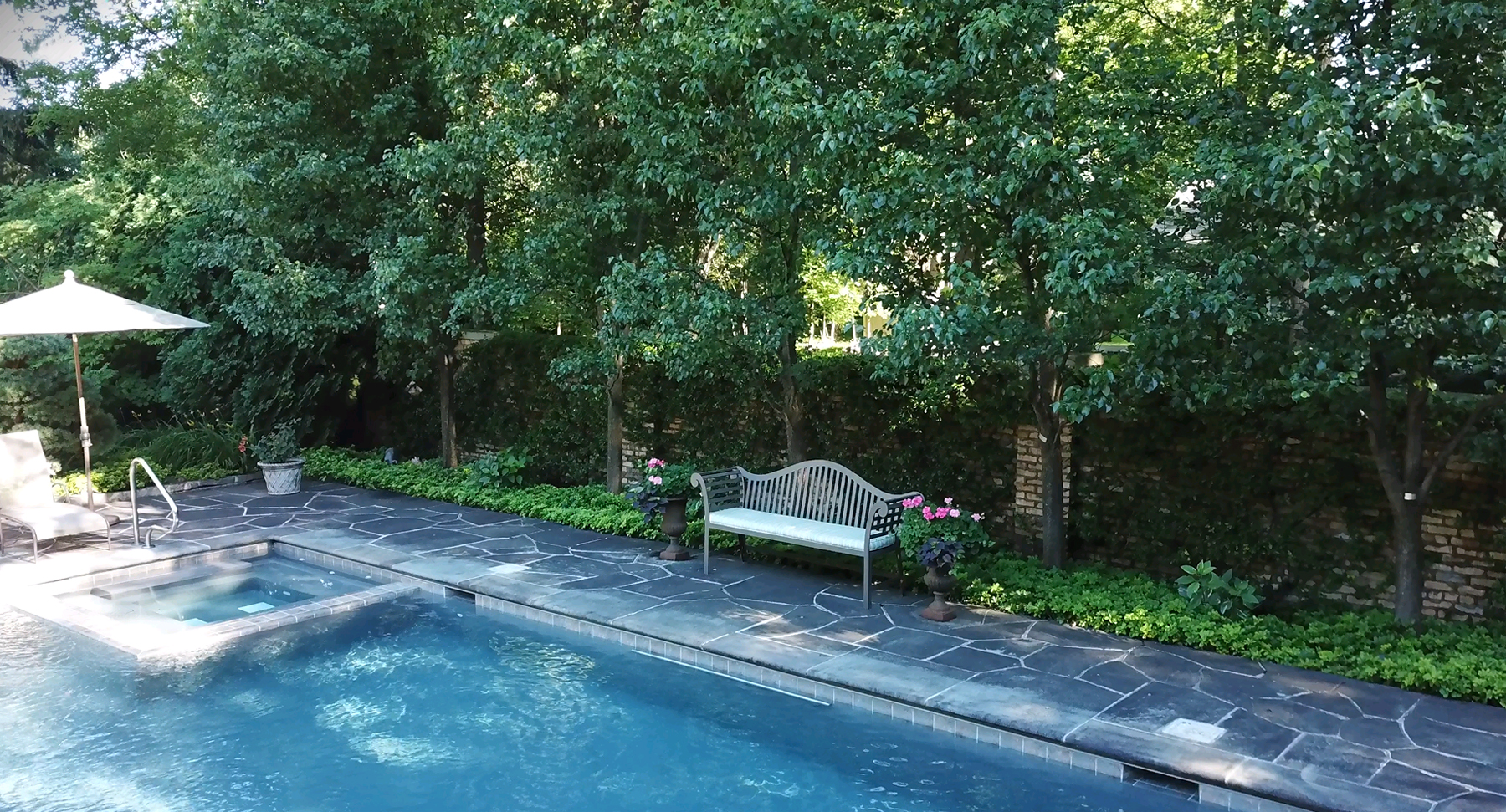 A new brick wall provides privacy and allows a backdrop for a hedge of pear trees. Vines and groundcovers complete the look. The bluestone coping became complimentary to the bluestone decking by taking on irregular shapes of their own. The once arched windows on the house transformed to doors that lead to a bluestone landing complete with brick pillars and wood pergola which provide a smooth transition from the house to the pool deck.  Formal plantings along with planting containers soften the hardscapes. 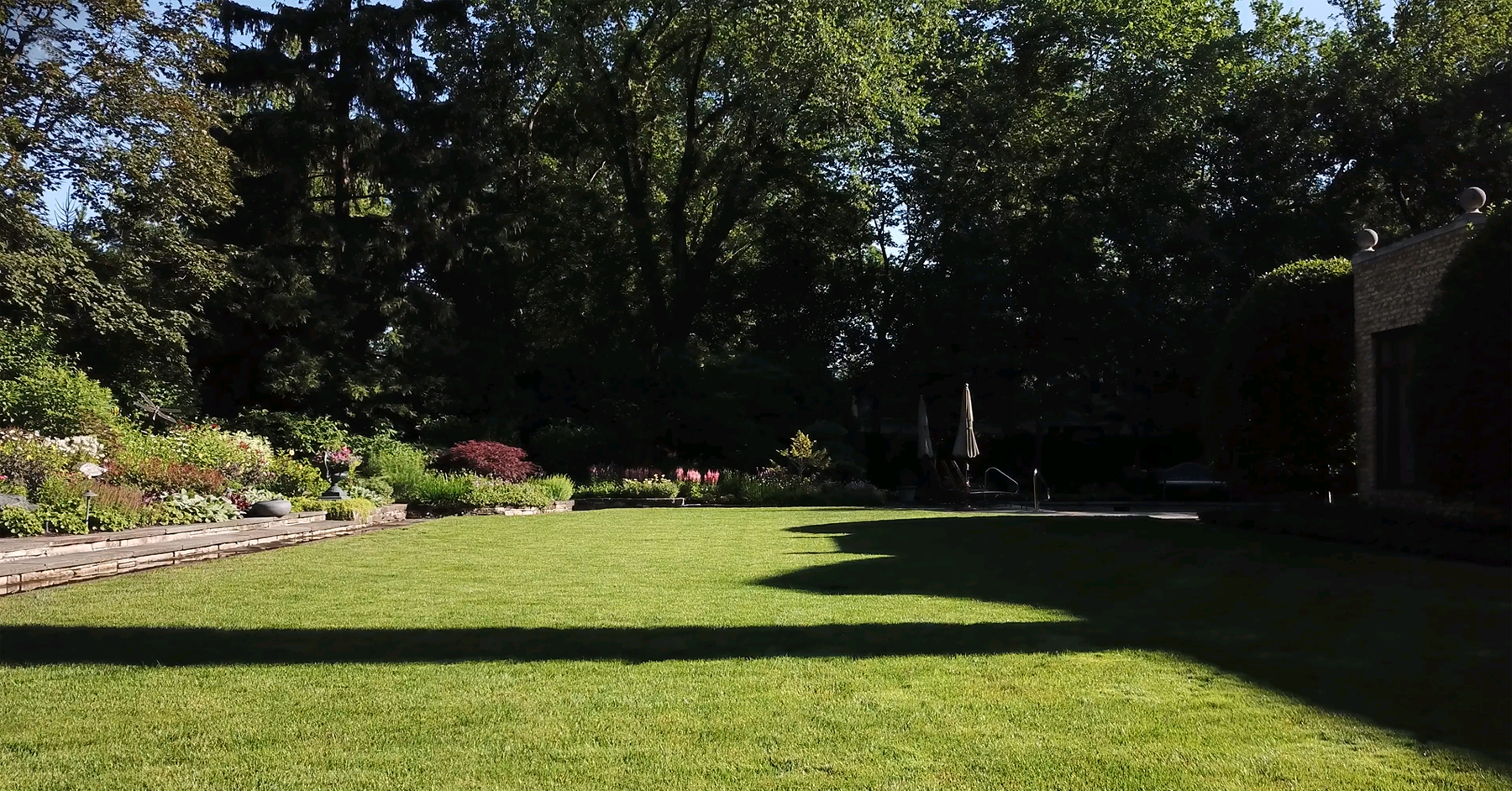 A formal lawn panel provides structure and visual relief from the surround plantings. Under the entire lawn is a large gravel ‘cistern’ that collects all the water in the rear yard. Without this solution many of the other plantings would not have been possible. A bluestone walkway and raised beds run the perimeter of the entire lawn panel. The raised beds help keep the beds dry while providing formality. Hundreds of cubic yards of specialty soil were imported to help insure the perennials, and other plantings, would have the best growing medium possible. A long stone staircase leads the way into the sitting area of the garden. While a few large trees existed, several very large trees were installed to create a breathtaking backdrop to this patio and the garden. A brook and pond added to the serene look and feel of the garden. The customer took some time finding the perfect statuary, which lead to us working with them finding the ideal positioning. A stone bridge connects the sitting area to the loose woodland walkway beyond. It cannot be stressed enough the love of plants the clients have. Months and months of detailing out every single plant and its positioning in the garden still sees constant changes with weekly on-site meetings. These meetings help insure nothing is ever out of place. Steppers lead the way around a woodland garden under mature and larger trees on the property. The same level of detailing of the plant material was expected, and was given, for this garden. Plants had to be positioned so the walk would bring new interest during every step and turn. The formal dining and sitting patio extends off the new house addition. A seat wall encloses the space and gives is a subtle separation from the gardens. These walls match the house brick along with the weeping mortar joints. The patio had to be large enough to handle gatherings, but not too large to eat up any garden space. The hybrid tea rose garden is the most cherished by the client. We worked with suppliers to come up with a soil mix that would be perfectly balanced for these roses. Unbelievable care had to be given to moving, storing and replanting the roses during construction. A new wood gate and lattice fence welcome guests into the rear yard. It was imperative that the spaces flowed together and were visually connected. This helped bring the garden spaces together into one thematic crescendo.