Mature trees, water issues and outdated landscaping, were the issues that started this project. Our master planning took several different directions which started with us confronting a front yard that had no structure, extremely small entertainment spaces, and standing water around the entire 2.5 acre property that were causing issue around, and inside, the house.

Design work started by solving the water issues while keeping in mind the hundreds of mature oaks, hickories and maples on the property.  We worked closely with our civil engineer to come up with a plan of various rain gardens, berms, drain inlets and discharge piping, which in some cases were 18” in diameter, to move water across the property. Extreme care was taken to protect the trees which included such measures as protection fencing, heavy construction mulching, root pruning, air spading directional boring, hand digging, when needed, and other means to insure that trees would not be harmed.  Directing, moving, and storing water across 2.5 acres while avoiding mature trees took the understanding of the entire team about the sensitivity of the work they were performing.

In tangent with the drainage the hardscape plans took shape. The rear yard entertainment spaces had to allow not only for smaller gatherings, but also had to be substantial enough to host large parties. The views to the sprawling rear yard could also not be obstructed. Multiple rooms were created which were outlined by a continuous stone bench. The bench, opposed to a solid wall, allowed an open feel around the patios while still providing plenty of overflow seating. A custom stone fireplace was requested that needed to be, in the words of the customer “Unique, different and charming” No less than fifty variants of this fireplace were drawn.

Construction of the rear yard patios were difficult due to the tight spaces to get machinery and supplies into the rear yard, again, tree care was of the upmost concern. Precision was given to the seamless detailing between the concrete patios with the stone inlays. This went as far as planning the location and positioned of all of the control joints. This was all made possible by working side by side with our concrete sub to help insure the patios turned out as envisioned.

The front yard had to take on the same mantra, small feel but large spaces. A horseshoe driveway was installed along with a stone accent wall to provide a courtyard feel. In several cases this wall was only several feet away from mature hickory trees. Metal grade beams along with strategically placed concrete support foundations were used throughout to help insure the safety of the trees. Granite curbing, paver inlays and refreshed plantings finished the look.

With the water issues solved, woodland plantings finally were able to thrive. Care was given to smoothly transition between the ornamental and rain garden plantings to prevent any visual gaps.  The last touch, a putting green that the homeowner had been dreaming about for years. The patio spaces are split into four distinct rooms. Each one having its own size, charm and intended use. The largest space, and the heart of the patios, is the dinning and fireplace patio. During this process various conceived additions to the house were executed by a long term subcontractor that we have always been able to work with flawlessly. 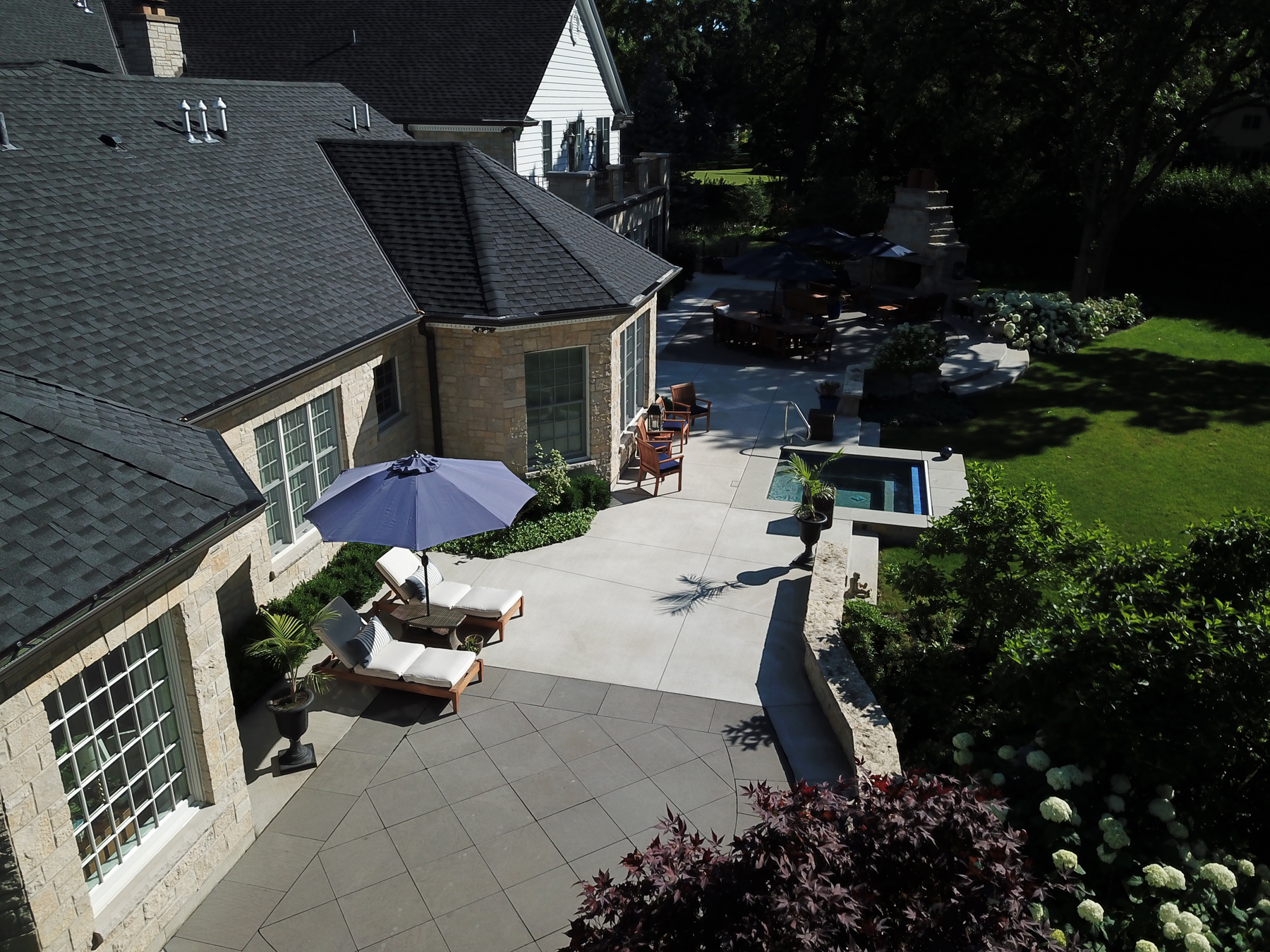 The quaint sunning patio was intended to be a place to take in the sun and relax.  Smaller in size than the main patio this patio can easily be cozy enough for two or also become overflow space during larger parties. The entire team worked tirelessly to insure that the concrete borders would work flawlessly with the intended natural bluestone inlays. Morning Coffee is perfect in the breakfast nook. Intended for the two clients to spend time together without the feel of floating within a much larger space. The pergola and the climbing vines gives the space a very intimate feel and also allows a gracious transition from the house to the main patio space during larger gatherings. 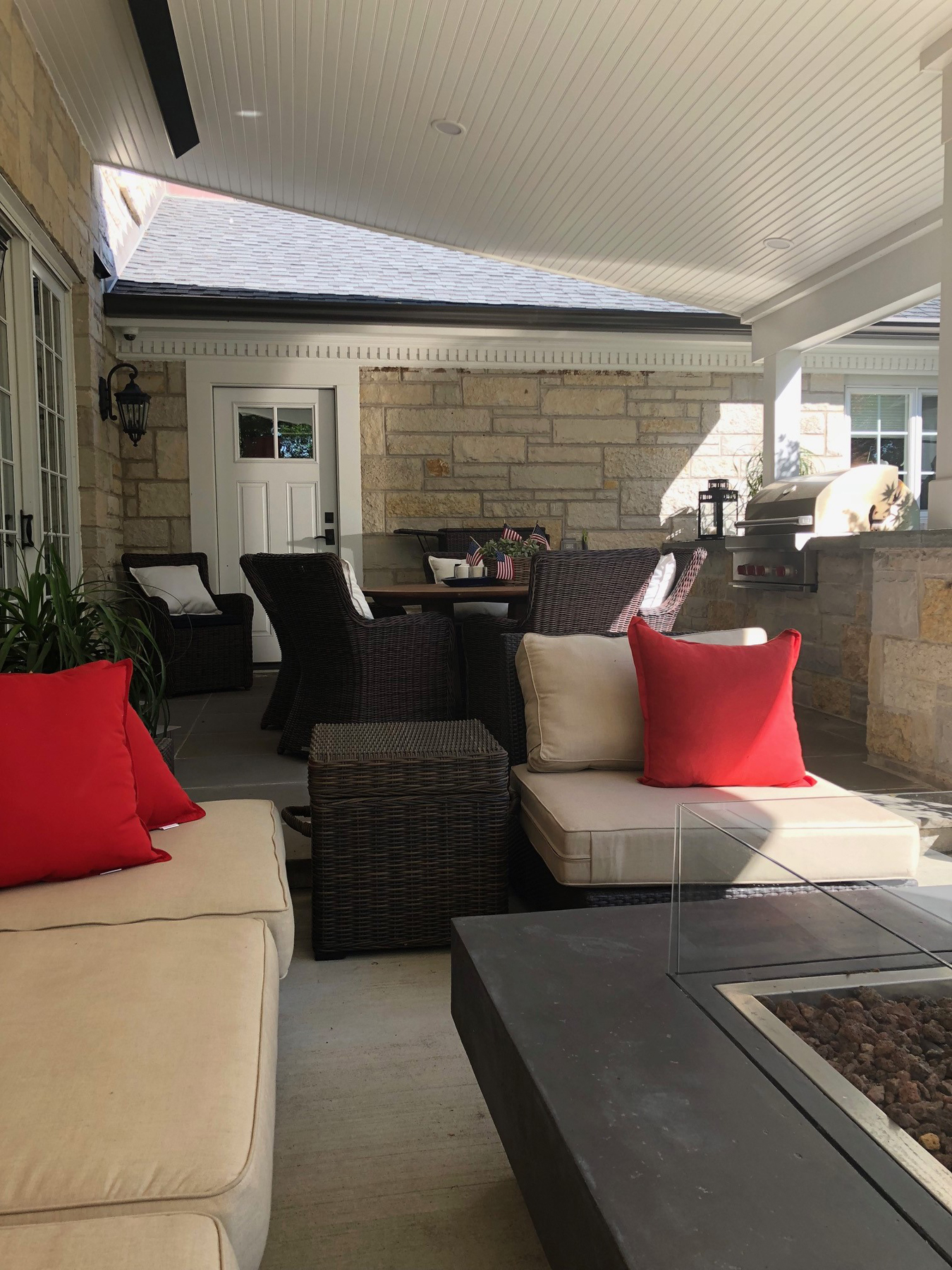 The firepit and BBQ patio was the answer to the issue of how to address the “drop in” of one of the neighbors. Dinner for two or drinks for four is its intended use. Although difficult, given the age of the house, care was taken to insure the BBQ stone, as with all the vertical stone elements, matched the existing house stone impeccably. The fireplace was a “must have” on the wish list from the client. Hard lines, from the angular stone, had to be broken up and softened by round boulders to provide the required look. The specific boulders that were used were carefully chosen, at the quarry, to provide the exact scale, shape and color needed. The stone benches not only give a visual separation between the patios and the surrounding plantings, but also provide overflow sitting for parties. A solid seat wall would have given too much visual mass around the edges of the patio where the stone benches offer a much needed open feel. The new horseshoe driveway provided the needed room for guest parking. Drainage was added to help relieve the issue of pooling water and icing. To provide structure a curved stone wall, granite curbing and paver inlays were added. Those elements are complemented by formal foundation plantings and loose woodland plantings under the mature trees. Great caution was exhibited to protect the trees during wall construction. To span tree roots, metal beams on concrete post foundations took the place of traditional construction methods. A 12” thick mulch matting “pathway” was used along the wall as the stone was being installed to help insure ground compaction was kept to a minimum. Rain gardens were accented with appropriate natives and then were surrounded with more “traditional” plantings. What occurred were these wonderful pockets of colorful, lush plantings that could be seen and enjoyed from almost anywhere around the property. The putting green was added to the rear part of the property and was positioned close to the refurbished tennis court. As with most elements around the property, several revisions of the shape, layout and positioning of the green were considered before the final layout was approved.

For more on this extensive ILCA award winning renovation, check out the video on our you tube page!

Don’t need to be in a secluded part of the yard.

Don’t have to be strictly for s’mores.

Don’t have to be boring.

Firepits DO help create ambiance, a wonderful cozy feel and dramatic scenes so incorporate them into seat walls and your dinning spaces and have them create a WOW factor. We love doing just that for our clients.